The Judith Neilson Institute for Journalism and Ideas (JNI) will partner with JERAA on a special Constructive Journalism reporting project for 2020.

JNI’s involvement will help hundreds of students and staff complete projects on the working theme of ‘Making a Difference’.

Two students judged by JNI, JERAA and The Junction, to have completed the best work will be offered a one-month secondment in 2021 to one of the world’s leading journalism institutions, the Constructive Institute in Denmark. One student will be from the Pacific Islands.

Working with the Constructive Institute’s founder and CEO, Ulrik Haagerup, the student fellows will take part in meetings with start-ups, media, politicians, and will take an active role in the Constructive News Lab. The students will gain insight and complete an intensive course in the principles of Constructive Journalism.

Hundreds of students enrolled in journalism classes around Australia will be able to take part in the reporting project, culminating in the production of high-quality stories using video, audio and multimedia for The Junction, a national collaborative student publication.

The Junction is a project of the Journalism Education and Research Association of Australia and features the best student work in all mediums from university journalism programs. Twenty-five universities in Australia, New Zealand and the Pacific currently support and publish on The Junction website.

“Everyone knows that the news media industry is in the fight of its life, with COVID-19 hastening publisher closures and journalist job losses, but this time of disruption also brings innovation and opportunities,” Dr Wake said.

“By encouraging academics and students to explore the idea of Constructive Journalism, where stories are presented in a fully contextualised manner, this new generation of journalists can refresh and renew attitudes to journalism.

“Universities may wish to create pieces on how government decisions will impact on young people or explore how domestic policies impact neighbouring countries (energy policy/coal, for instance) but the emphasis must be on constructive journalism.” 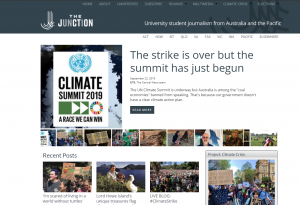 The Junction editor Andrew Dodd said this gives students across Australian the opportunity to explore new ways of doing journalism and producing stories that have depth and nuance.

“This project builds on our hugely successful national election coverage in 2019, and it will again showcase the talents of the next generation of journalists.”

The Executive Director of JNI, Mark Ryan, said JNI had helped bring Ulrik Haagerup to Australia in March this year for a series of events and newsroom workshops and was keen to extend that relationship.

“JNI wants to support journalism education, and to play a role in connecting students from Australia and the region with some of the best emerging ideas internationally,” he said.

“We think this initiative is just one step towards doing that, and in the process we can all learn a lot that can be incorporated into future constructive news projects.”

About the Constructive Institute

The Constructive Institute was founded by Ulrik Haagerup, a former executive director of news at the Danish Broadcasting Corporation, in response to the increasing tabloidisation, sensationalism and negativity of the news media. The Institute promotes solutions-focused, nuanced journalism that makes a positive contribution to democracy. The Constructive Institute is based at Aarhus University in Denmark.

Ulrik Haagerup, the founder and CEO of the Constructive Institute, outlines the case for the constructive news movement.