Most of us know Jolyon Sykes as the affable and knowledgeable treasurer of JERAA and some folks know he’s also the secretary-treasurer of ANZCA. We assume he’s had a background in journalism and that’s why he’s so passionate about the discipline and the industry.

But our treasurer is a bit of a polymath – he’s had an interesting career (or should I say, careers).

And who knew he graduated from QUT (then QIT) as an electrical engineer and worked in the Queensland power generation industry? Jolyon has also been a researcher in two ARC grants into trauma, vulnerability and journalism and, of course, has published widely on those subjects.

But he’s also been intensely interested in other areas of social justice. For example, the failure of freedom of information legislation to produce greater access to information has been a constant theme in his inquiries.

And there may be some (few) here would not be aware that Jolyon has an intense interest in politics and political history, and has written extensively about former Prime Minister Andrew Fisher. Gympie, where Jolyon was born, was the urban centre of Fisher’s electorate, and this might have had something to do with Jolyon’s interest. Jolyon published Andrew Fisher and the news media, among others, in an attempt to make the man who served three separate terms as Australia’s Prime Minister better known among Australians.

Jolyon’s commitment to social justice also led him to feature on 2VOX-FM’s program Struggle Street. And Jolyon’s voice can also be heard from time to time in various choirs, where he adds an impressive deep timbre to their output. Jolyon had a special connection with the late Professor Clem Lloyd – indeed, Jolyon gained his Master of Journalism degree in the program that Clem introduced at the University of Wollongong, and when Clem won a SPIRT (now Linkage) Grant from the ARC, he turned to Jolyon as his researcher.

When Clem died suddenly on New Year’s Eve in 2002, Jolyon wrote a eulogy.

Jolyon’s Linked-In profile describes him as: Freelance journalism researcher, journalist, writer and subeditor (cheap at $45 per hour). Hon secretary-treasurer of ANZCA Inc; Hon treasurer of the JEAA Inc. Father, grandfather, pet-owner, Mazda 323 enthusiast, bush regenerator and man about the house and it lists his “specialities” as Journalism ethics, copywriting, and fiction. 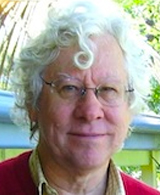