Peter Jeppesen has died at the Caritas Christi Hospice in Kew after a battle with cancer.

Colleen Murrell, who is pictured wth Peter at the UN Media Awards in 2013, has written a little about her Deakin colleague.

Peter was a brilliant and motivated journalist and educator who will be sorely missed by his colleagues at Deakin. Peter worked for ABC radio news and current affairs for 30 years, and some JERAA colleagues will remember him from that time. I first worked with Peter at SBS back in 2002/3. He was then the editor of the World View current affairs programme, which he managed with great enthusiasm, flair and dedication. Working there was always fun and intellectually stimulating.

He was intrigued when I left to take up a job in the academy and a year or so later he joined me here at Deakin, where he has taught a wide range of subjects. He really took to the role of lecturer and enjoyed mentoring the next tribe of journalists. He also said that working in a university helped him to be more in touch with his own children’s lives, as all three were students at the time.

Peter never gave up his enthusiasms. Last September, despite his ongoing treatment, he insisted on taking part in a judging panel for the UN Media Awards and he cycled into the CBD, something I probably wouldn’t do these days. After that we decided to blow some money and attend the swanky awards, which Peter really enjoyed. Peter was always railing against injustice. Two weeks ago he told me he was still listening to the radio and was relieved that Jon Faine was back as nobody else was asking politicians the tough questions. Last week he badgered two colleagues Jillian Hocking and Andrew Kruger about what they were going to do about the state of the world. He was interested in everybody and he was always kind and thoughtful.

A notice will be put in The Age announcing the funeral, which is likely to take place next week. 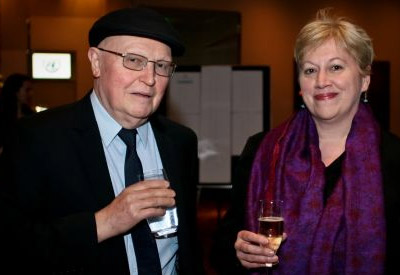